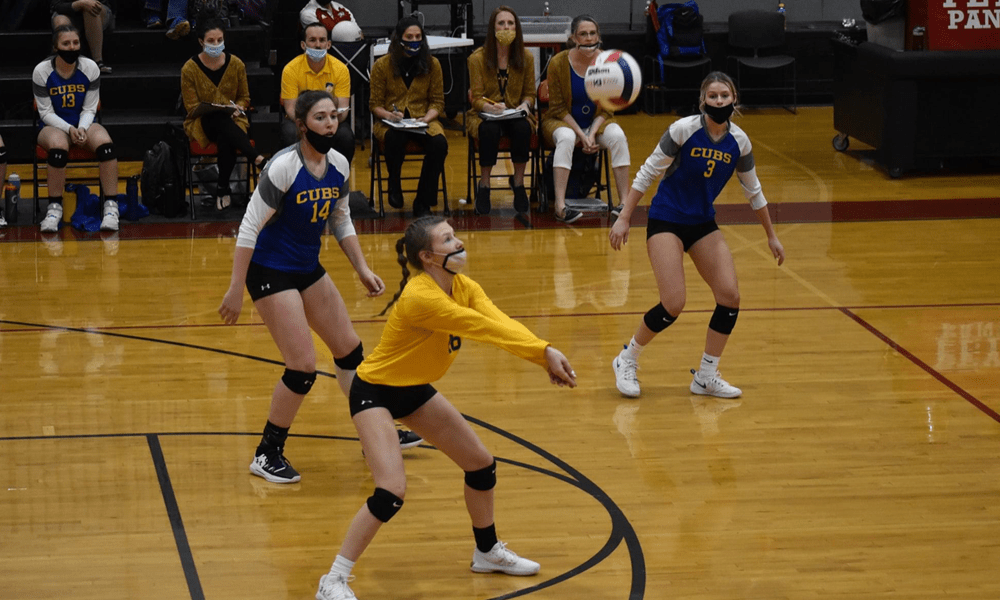 League championships continue to be the focus for Colorado Preps as we continue the daily preview of the top volleyball matchups in and out of the top 10.  Just nine days remain in the regular season before each class is narrowed to 24 teams for the playoff run.  State championships are set for May 10th and 11th in Loveland.

In Class 1A, the feature game is between #2 Simla and Elbert as that winner takes over the top spot in the Black Forest.  They each lead Evangelical Christian by one game and since the Cubs have already beaten ECA, they will be just one win away from clinching the crown.  After tonight, Simla has just Colorado D&B and Miami Yoder left on the league slate.  Elbert meets Evangelical Christian on the 22nd.

#3 Stratton/Liberty survived a five-set marathon to beat Genoa Hugo on Tuesday night.  That win though gives them a chance to clinch the Union Pacific crown with a win over Burlington tonight.

#7 Springfield meets McClave in a non-league contest that could end up being very important to the regional bracket.  The Longhorns sit seventh in our most recent combined rankings and would host a regional tournament in that spot.  McClave is 12th overall and still in position to climb into the top eight and a win over the Longhorns helps them on that journey.

Limon and Byers likely battle for second within the Union Pacific.  Each trail by one game and has a loss to league leading Stratton/Liberty.  As mentioned earlier, the Knighted Eagles have a chance to wrap up the title tonight as well.

In Class 3A, #2 Lutheran secures the Metro championship with a win over Colorado Academy and #3 Lamar remains alone in first inside the Tri Peaks by beating St Mary’s.  The Savages lead Manitou Springs, Vanguard and James Irwin by one game in the loss column.

Liberty Common must upset #4 Sterling to remain one back of Eaton in the Patriot conference.  The Eagles challenge the Reds on Saturday but must win tonight to make that game important to the league championship battle.  Liberty Common is coming off a 3-1 loss to Platte Valley on Tuesday.

Montezuma Cortez also looks to stay perfect on the season against four corners rival Durango.  It was billed as a battle of unbeatens early in the week but that promo changed when the Demons were upset by Bayfield (3-1) on Wednesday.  Both teams though lead their respective conference races.  Cortez has already wrapped up the 3A IML and Durango is tops in the 4A/5A Southwestern.

Erie is two games back in the 4A/5A Northern conference chase but they’ll look to knock #9 Mead out of first place.  The Mavericks are tied with Windsor as the two remaining league unbeatens.  #6 Thompson Valley is heavily favored against Northridge but must win to keep pace with Niwot atop the Longs Peak.  The Eagles beat Niwot earlier this month so they have the tiebreaker.

In Class 5A, Ralston Valley should get by Dakota Ridge and a win keeps them tied with Columbine atop the Jeffco.  The Mustangs are 9-0 and haven’t dropped a set this month in beating Fairview, Arvada West and Chatfield.

NOTES:  Fossil Ridge looks to keep sole possession of the Front Range by beating Horizon.  The Sabercats lead Fort Collins by one game in the league standings.  Horizon started the week one game back but fell two games off the pace with Monday’s loss to Loveland (3-0).  Pueblo South (5-2) and Pueblo County (4-3) battle for second place behind unbeaten conference leader Pueblo West.  County shared the spot with South to open the week but a loss to West on Tuesday left them in third place.  South has a rematch with West coming up next week.  Should County gain the win tonight, then Pueblo West secures the league crown by beating Pueblo East.  Frederick still has thoughts of at least a share of the Longs Peak crown as they trail league leaders Niwot and Thompson Valley by just one game.  Fort Morgan is fifth in that race but the Mustangs were also 25th in our composite rankings posted earlier this week.  A win over Frederick should move them up those standings and increase their playoff chances.  James Irwin and Vanguard each have one league loss and share second place with Manitou Springs in the 3A Tri Peaks.  All are looking up to unbeaten Lamar.  Neither James Irwin nor Vanguard has played Lamar yet so the winner still has a chance at winning the league championship.  Basalt is the 3A West Slope leader by one game over Coal Ridge and Delta.  The Longhorns have already beaten Delta so a win over the Titans pushes them very close to the conference crown.  It’s the same situation for La Veta and Manzanola as that winner is likely the 1A Fishers Peak champion.  Neither the Redskins or Bobcats are currently in the top 30 of composite rankings.  La Veta clinches the crown with a win tonight; Manzanola must win tonight and beat Primero next week to win the title.