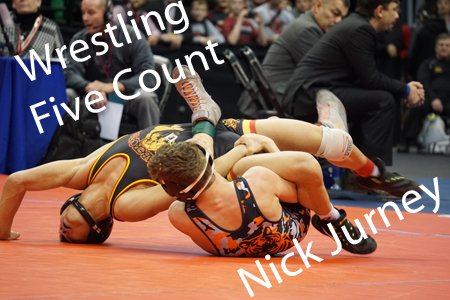 It’s a big weekend of wrestling, friends – particularly for those headed to the humble ‘burb of Lafayette, Colo.
Centaurus High School will be the site of the 19th annual Top Of The Rockies Invitational wrestling tournament, which has emerged as one of the toughest in-season competitions that the state of Colorado has to offer.
With three of the four classifications’ top-ranked teams slated to be in attendance, along with three No. 2’s, two No. 3’s, and a slew of other highly touted teams and individuals, this is just about as close as we can get to an all-classification mock state tournament. Not to mention, there are some hammers from out of state expected to mix things up, including Nebraska’s Scottsbluff and Omaha North, Oklahoma’s Edmond Memorial, and Wyoming’s Cheyenne East, to name a few.
That being said, we’re going to do something a little bit different with the Five Count this week; rather than breaking down five different tournaments, we’re going to take a look at five storylines to watch at TOR this weekend.
Let’s get ready for a Top Of The Rockies rumble.


1: Who Rules 5A?
After last week’s uber-tough Arvada West Invite saw the Grand Junction Tigers emerge victorious, some 16-points clear of No. 1 ranked Pomona, the lingering door of debate was immediately swung wide open.
Class 5A appears to be a three-horse race between pure thoroughbreds, with Grand Junction, Pomona, and Poudre all possessing the capability to be the best team on the mat on any given day.
The Top Of The Rockies will bring these three powers to the same gym for the first time all season – and it’s not by accident.
Each squad wants to see exactly where it stands with exactly one month to go before the state championships are decided, and each makes a compelling case for the ruler of the state’s largest division.
Grand Junction is led by two-time champ and three-time placer Josiah Rider, an NC State commit and top-ranked 152 pounder who has been thoroughly dominant all season. How dominant? Of Rider’s 18 wins this season, 16 have been by pin; of those 16 pins, 14 have come in the first period. The Tigers also have point-scorers in Dylan Martinez (No. 2, 145), Dawson Collins (No. 1, 113), and JT Skalecki (No. 3, 170).
Poudre boasts the athlete who could become the next member of Colorado High School wrestling royalty come February, Jacob Greenwood (No. 1, 145) but it also has a host of highly ranked comrades in Job Greenwood (No. 2, 132), Brody Lamb (No. 4, 138), and Weston Mayer (No. 5, HWT).
And Pomona, the defending state champ, has a handful of state and nationally ranked wrestlers, including the Brothers’ Yapoujian (Wyatt at 106 and Colton at 138) and Doc Buchanan champ Theoruis Robison at 132.
Of course, all of these teams have hammers. But we all know that tournament titles are won on the back side, which is where a bulk of the interesting matchups will go down this weekend.

2 (TWOOOOOOOOO): Steel City Scuffle
The small southeastern settlement of Pueblo just might feature the highest concentration of mat grinders in the entire state.
Pueblo County hasn’t won all that many tournament titles this season, but don’t mistake that for a slump. The Hornets – ranked No. 1 all year and winners of the past two 4A crowns – have gone through the gauntlet all season long with respectable showings at the Doc Buchanan, Reno Tournament of Champions, and most recently the Arvada West Invite where they finished just behind Grand Junction for top honors.
Junior Brendon Garcia, a two-time state champion, still has never lost an in-season match to a Colorado opponent during high school competition, and his mettle will again be tested in a 113-pound TOR bracket which could feature the likes of 4A No. 3 Drew Lucero (Pueblo East), 5A No. 1 Dawson Collins (Grand Junction) and No. 2 Adrian Marquez (Castle View), and 2A defending state champ Dillon Jaramillo (Rocky Ford).
Hot on Pueblo County’s heels will be Pueblo East, the No. 3 team in Class 4A which has its fair share of Steel City Studs. Combined, the Pueblo contingent (which also includes Pueblo South) could make a case for at least two of the top five spots at TOR.
The Eagles have done some shifting among their lineup which could prove favorable in certain areas, with Drew Lucero (113), Jace Trujillo (120) and Aaden Valdez (132) all establishing themselves within the top four contenders after dropping down a class. Meanwhile, Zion Freeman (182) has quietly put together an impressive season and established himself as the one to beat in 4A at 182. His lone losses on the year have come to 5A defending champ Tate Samuelson of Castle View, who should also be in the mix at TOR.
Pueblo is in its wrestling heyday, and they are all out to prove it against some top competition this week.

3: Mean Moose Marching
Alamosa, the top-ranked team in Class 3A, has made its case for that top spot all season long. After winning their home invite in runaway fashion last week, the Mean Moose head to TOR with an eye on making a statement.
Alamosa’s key strength is depth; with five wrestlers ranked in the top four, including top-ranked 126-pounder Joe Chavez, it should be no surprise that Gary Ramstetter has put together another formidable contender.
Chavez has lost just one match in-state all year – that was to Pueblo County’s Nathan Bonham (4A No. 3), who could be among Chavez’s competition this weekend along with 3A No. 2 Caleb Cox and 5A No. 1 Fabian Santillan.

4: Meloneers Won’t Back Down
There’s only one Colorado Class 2A squad in the field at TOR this year: The Rocky Ford Meloneers. The defending small-school state champs have a tough row to hoe this weekend, but if anyone is up to the challenge it’s Coach Jurney’s Meloneers.
Rocky Ford boasts top-ranked individuals at 145 pounds in Carlos Romo and 285 pounds in Greg Garcia, while defending state champion Dillon Jaramillo is returning to form after missing the first half due to injury.
Garcia has established quite the rivalry with Pueblo East’s Andy Garcia, the defending 4A state champ, over the past few years and the two could meet again in a heavyweight field of heavyweights.
After making a few weight shifts of their own, the Meloneers seem poised to contend with the best of them this weekend.

5: Others To Watch
But wait, there’s more. Lakewood standout and Stanford commit Gabe Dinnette (5A No. 1) at 160. Ponderosa stud and world champion Cohlton Schultz at heavyweight. Castle View’s dynamic Malik Heinselman (5A No. 1, 120). Class B No. 3 Scottsbluff, Neb.
And the list goes on. The Top Of The Rockies will certainly not disappoint.
Competition is scheduled to begin Friday at 1 p.m., while Saturday morning at 8:30 a.m. will see the start of the championship quarterfinals. Finals are scheduled for 6 p.m., all at the Centaurus High School gym.

Bonus Points
There will be some noticeable absentees from the Top Of The Rockies Tournament, namely any school from the Colorado Springs metro area. That’s because this is also the weekend for the COS Metro Championships, where Cheyenne Mountain (4A No. 9) looks to defend its crown against the likes of Mesa Ridge (4A No. 5), Discovery Canyon (4A No. 6), and others.

Performance Of The Week: Nick Gonzales, Adams City
Quick Nick Gonzales made waves at the A-West Invite last week by knocking off No. 1 Fabian Santillan of Grandview in the 126-pound finals.
After edging Pueblo County’s Nathan Bonham 2-1 in the semis, Gonzalez, ranked No. 2 in Class 5A, secured a 5-3 win over Santillan for the tournament title.
In the process, Gonzales avenged his only two losses on the season. Talk about adjustments!