FOOTBALL COACHES OF THE YEAR 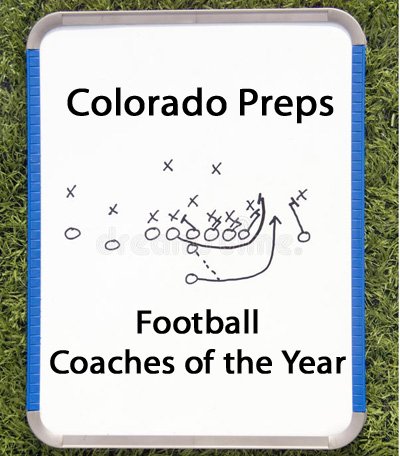 The very exciting 2017 football season concluded over the weekend and now post-season awards can be handed out.Â  Colorado Preps starts the process by naming our coaches of the year in all seven classes.Â  As we’ve done in the past, our network considers state championships coaches but also seeks out leaders who have reached heights new to the program and/or turned the program around from struggling seasons.
As a result, we post our coaches of the year for the recently completed season.

Our selection for Coach of the Year is Curt Connelly of Kit Carson.Â  The Wildcats lost a talented senior class from the previous season and Connelly took over for the legendary Jim Trahern who directed the program for over 30 years.Â  Connelly stepped in and led the Wildcats to another Final Four appearance before they bowed out with a 62-36 loss to eventual state champion Peetz.
Bulldogs coach Scott Sorenson also gained consideration for our award as he led the Bulldogs to their first state title since 2002.Â  Prairie’s Justin Kerns and Paul Griese of Otis also put together solid campaigns.Â  Kerns led the Mustangs to an unbeaten regular season and conference championship while Griese led the Bulldogs to eight wins which doubled their total from the previous season and marked the most for the team since 2011.

There are several great options for Coach of the Year in this division but when Sedgwick County gained their third consecutive championship, the choice was very easy as we go with Chris Michel.Â  The Cougars are the first team to win three straight titles in eight-man since Stratton pulled it off in the early 90’s.Â  Over the last three years, Michel has led the Cougars to 38 wins in 39 games with the lone loss coming to a Nebraska opponent.
Had the Cougars stumbled, our choice likely would have come from a list of Soroco’s Dick Dudas, Caliche’s Paul Zink and Adam Priestly of Mancos.Â  Dudas led Soroco into the state semifinals for the first time in school history and Zink got the Buffs into the playoffs (5-6) after failing to win a game in the 2016 campaign.Â  Priestly guided the Bluejays to eight wins, their most since MaxPreps began keeping season records in 2004.Â  Mancos also won a playoff game for the first time since 2002.

We have selected Brian Inman of Clear Creek as our Coach of the Year in Class 1A.Â  The Golddiggers finished 8-2 on the season and reached the playoffs for the first time since 1999.Â  Their season came to a close with a wild 39-34 loss to Monte Vista in the first round.Â  They finished with their most wins since 2004 and just their third winning season in that same span.
Others that gained consideration for the award were Jeff Giger of Strasburg, Kyle Forster of Centauri and Mike O’Dwyer of Limon.Â  Giger graduated several talented seniors from the 2016 state championship team but after adjusting his lineup midway through the season, led them back to the state finals where they captured a second consecutive crown.Â  Forster pushed Centauri to a perfect regular season and into the state championship game for the second time in four years.Â  O’Dwyer guided the Badgers into the state semifinals despite the Badgers having the smallest enrollment in Class 1A.

This was by far the most difficult division in which to choose just one coach for our award as Pagosa Springs, Salida, Aspen and Coal Ridge among others had tremendous turnaround seasons.Â  After careful consideration, we’ve selected Eric Handke of Salida as our Coach of the Year in Class 2A.
The reason is based on ending a playoff drought as the Spartans went to the post-season for the first time since 2009 which is the longest stretch of any programs under our consideration.Â  The Spartans also improved their win total by five this year; going 7-3 after earning just two victories in 2016.
Myron Stretton pushed Pagosa Springs to six wins this year after the Pirates had not won more than three in a season since 2011.Â  Their post-season appearance was also their first since the 2011 campaign.Â  Aspen jumped from two to eight wins under the direction of Karson Pike.Â  He also directed the Skiers into the playoffs for the first time since 2013.
Coal Ridge did not make the playoffs but Bob Frederickson led the Titans to a 5-4 record and their first winning season since 2010.Â  They captured just one win in 2016.
Others worthy of mention are Eaton’s Zac Lemon and Bayfield’s Gary Heide.Â  Eaton did not make the playoffs in 2016 but reached the semifinals this season winning two playoff games with a backup quarterback.Â  Heide of course guided the Wolverines to a perfect 13-0 season and a second state championship in three years.

We’ve selected Pat Weir of Skyview as our Coach of the Year in Class 3A.Â  The Wolverines improved their win total by three wins over 2016 and made a second consecutive playoff appearance.Â  And the two straight post-season trips have come within a program that has had difficulty producing wins in the past.Â  Before Weir’s arrival from Pomona before the 2016 season, the Wolverines had six years of one win or less between 2004-2015.
Other top candidates in Class 3A included Tom O’Rourke of Canon City, Chad Cooper of Erie and Tom Pulford of Palmer Ridge.Â  O’Rourke’s Tigers improved from four to nine wins this season and captured a league championship.Â  The Tigers also reached the playoffs for the first time since 2014.
Cooper directed Erie into the state championship game for the first time since 2008.Â  They of course fell short against Palmer Ridge in the finals last Saturday as Pulford led the Bears to their first-ever state championship and perfect 14-0 season.

There is not a shortage of qualified candidates in Class 4A this year as several programs took major steps during the 2017 campaign but our choice for Coach of the Year is Jared Yannacito of Golden.Â  He won a narrow race over Casey Pelton of Brighton, Michael Silva of Skyline, Rob Royer of Rampart and state champion Ryan Goddard of Pueblo South.
Golden had won a combined 10 games from 2011-16 but Yannacito turned it around to a 7-4 record this year and a playoff appearance for the first time since 2002.Â  They had not made a post-season appearance since falling to Monarch in the 2002 state finals.
Pelton led Brighton to a five-win improvement from 2016 where they won just one game.Â  His Bulldogs finished 6-4 this year to produce their most wins since the 2012 campaign.Â  Silva won just two games in his first season at Skyline (2015) but since has won 15 of 21 games including an 8-3 mark this year.Â  He also guided the Falcons to their first playoff appearance since 2000.
Royer led Rampart to just their fourth winning season since 2004.Â  The Rams also scored their first playoff win since 2001 when they knocked off Monarch in the first round this season.Â  Pueblo South, under the direction of Goddard, won their first-ever state title in the school’s 59th year of football.

Eaglecrest had produced just two winning seasons from 2004-2015 but this year reached the state championship game for the first time since 1992.Â  For that turnaround, we’ve selected Mike Schmitt as our 5A Coach of the Year.Â  In 2015, Schmitt won just four games with Eaglecrest but over the last two seasons his teams have won 24 of 26 with one loss coming to Pomona in last week’s big school state final.
Pomona’s Jay Madden also deserves credit for reaching the state championship game for a third straight year.Â  He overcame key injuries on his club to get there and was rewarded with the state championship this past Saturday; the second in Pomona program history.
Two others that drew consideration from Colorado Preps were Brad Pyatt of Arvada West and Tony Lindsay of Far Northeast.Â  Pyatt’s Wildcats won just one game in 2015 but has produced 13 combined wins over the last two campaigns.Â  Lindsay took over a Warriors program that had just three combined wins in three years but guided them to a 6-4 record this season.Â  It was just their second winning season since 2005.