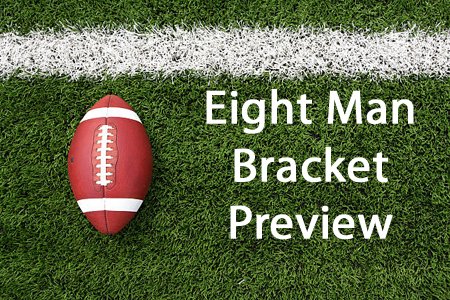 RPI has been updated in eight-man football following results on Friday, so we’re starting to get a better look at how the playoff bracket may shape up.Â  The numbers posted earlier today are not final as six more games are on the schedule for Saturday.Â  Even though none of the games involve a potential playoff team, the outcomes will impact strength of schedule for several teams and could move them up or down in the final RPI standings.
Official RPI numbers and playoff pairings will be released by CHSAA on Sunday.Â  But as always, we try to peek into the minds of committee members and come away with a bracket.

(POSTED BEFORE GAMES START ON SATURDAY)

(teams play at home in round one regardless of RPI standing)

NOTES:Â  As two-time state champions and unbeaten again this season, there’s no doubt Sedgwick County will be the top overall seed.Â  We also believe West Grand will be moved ahead of Merino into the second spot since the Mustangs are also unbeaten and have the advantage in comparison scores on head-to-head.Â  That leaves the Rams third as the top overall wildcard selection.Â  Hoehne checks in at number four as the Southern league champion and Gilpin County, despite the loss to close the season, also gets to play at home as the second-best wildcard in the RPI.
Then comes the list of league champions and even Sargent, Rocky Mountain Lutheran and Springfield are not in the top eight of RPI, they earn the higher seed and the right to play at home since they picked up a league title.Â  Those three are slotted in spots six through eight.
The second half of the bracket is also difficult in attempting to decide where the committee might go.Â  Sometimes the committee goes straight RPI and at other times, travel is a consideration.Â  And of course, the committee prevents first round matchups of teams from the same conference.Â  So with that in mind, there is plenty of movement.
Fowler and Holly are next in RPI and they fit nicely into the 9th and 10th spots for both travel and placement.Â  We flipped Mancos and Haxtun to avoid Mancos having a first round pairing with Sargent since they’re from the same conference.Â  We also moved Norwood ahead of Soroco since they beat the Rams head-to-head this season.Â  And then flipped Caliche and South Park in the final two spots to avoid a conference matchup of Caliche and Sedgwick County.
We could also see South Park and Soroco exchange places due to travel considerations.