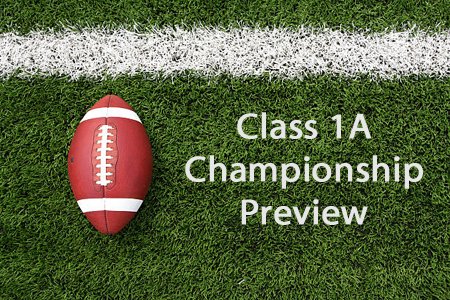 Based on pre-season polling, Saturday’s 1A championship game features one team expected to be there and one that is not.Â  As defending state champions, Strasburg opened the 2017 season ranked number one in the CHSAA poll and despite an early loss to Bennett, stayed in the top five throughout the season.Â  Centauri was not included in the pre-season rankings but jumped into the top five after beating Paonia in zero week.Â  And with their 12 straight wins, the Falcons have been a member of the top five ever since.
On paper, the matchup seems to pit a high scoring offense against a very stingy defense.Â  Strasburg averages nearly 37 points a game but faces a defense that’s given up only five points per contest.Â  The Falcons also posted five shutouts during the season and technically added a sixth when they held Monte Vista to just a safety during a 27-2 regular season win over the Pirates.
That defense features Bennie Chacon and Brian Shawcroft.Â  Chacon is the top tackler with 102 and is second in tackles for loss (11) and sacks (7).Â  He’s also recovered three fumbles.Â  Shawcroft has been in 38 tackles but is also tops on the team in sacks with eight and tackles for loss with 12.Â  Together they hope to put pressure on the Indians offense and make plays in the backfield before the Indians can turn upfield.
Adam Chacon (76 tackles) and Jackson Price (72) are two others watch for Centauri.Â  Tristan Crowther has chipped in four sacks and three fumble recoveries.Â  Brandon Buhr has five interceptions and Nate Anderson two.
Offensively, Strasburg is a much different team after moving Jacob Miller to quarterback and swapping a few others around in the lineup at mid-season. Â Since those moves, the Indians have featured better blocking up front and more space for runners to find yardage.Â  Miller was crucial in last week’s upset of top ranked Bennett as his touchdown scamper on 4th and one gave the Indians a two-score lead late in the game.
Hunter Bergstrom though remains the first option on offense.Â  The senior has rushed for 1,276 yards and 22 touchdowns this season and has a good history in state championship games.Â  He ran for 177 yards and two scores in last year’s title win over Meeker.Â  As a result, he should get quite a bit of attention from the Centauri defense.
Miller has 455 yards rushing and seven touchdowns and freshman Trystan Graf has provided 403 yards and six scores.Â  Bergstrom is the top receiving threat with 13 catches for 222 yards and four scores.
Strasburg’s defense allows 12 points a game.Â  They’ve posted four shutouts including a 21-0 decision over Burlington in the state quarterfinals.Â  Wyatt Warren leads the team with 60 tackles and Jon Walters is next with 53.Â  Reed Sims (41) and Bergstrom (40) also get involved.Â  Two others to watch with state championship experience are Chad Wiebelhaus and Chris Gudka who have combined for 15 tackles for loss and five sacks this season.
Freshman Collin Russell headlines the secondary with five interceptions.Â  The Indians have 15 interceptions and 26 total takeaways on the season.
The Centauri has proven they can score equally well on the ground and through the air.Â  QB Nate Anderson has tossed 11 TD passes including six to Sam Anderson.Â  Taj Cornum (643 yards) and Buhr (609) are also a very good one-two punch in the backfield.Â  They’ve combined for 15 touchdowns.Â  Those numbers are based on just the eight games turned in by Centauri to MaxPreps.
Despite the distance between the two schools, they have a common opponent in Limon.Â  Both picked up hard fought wins.Â  Strasburg edged the Badgers 14-12 in week four and Centauri collected a 20-12 win in last week’s semifinal.
Strasburg as mentioned is the defending state champion and is trying to go back-to-back for the second time in school history.Â  The Indians won two straight championships in 1989-90.Â  They’re 7-1 against playoff teams this year including two wins over Burlington.Â  They split with Bennett and topped Limon.
Centauri is in the state championship for the second time in school history.Â  They fell to Paonia 32-24 in a well-played 2013 title contest.Â  It’s their first ever post-season meeting with Strasburg.
Kickoff is set for 1:00pm this Saturday in La Jara.Â  If technology permits, the game will be available on a live video stream from the NFHS Network.